In a nutshell about fonts

Home » Advice » In a nutshell about fonts


In a nutshell about fonts, part one

Typically, clients understand nothing in fonts. Many people think that any serif font is “standard Word”. This is all that is needed to suffer and be angry, to explain everything in order.

Such an article could be composed of continuous disclaimers like “we will consider only modern European writing systems when Aries is in Mercury”. We did so, and then all this was removed, but a few warnings had to be left.

When we were students at the faculty of graphic design at the university, we were forced to draw ink on paper using grids, rulers, and compasses.

Over the years and with experience, it has become clear that, in fact, it is impossible to build a good font using clear geometry. Such fonts are inconvenient to read. Even those that look like drawn ones are actually compensated for a comfortable perception by a person.

Our brain perceives geometrically regular circles and squares a little elongated vertically – nothing can be done, that’s how it works. Therefore, all the letters O are slightly flattened, and there are an incredible amount of similar visual compensations in fonts. 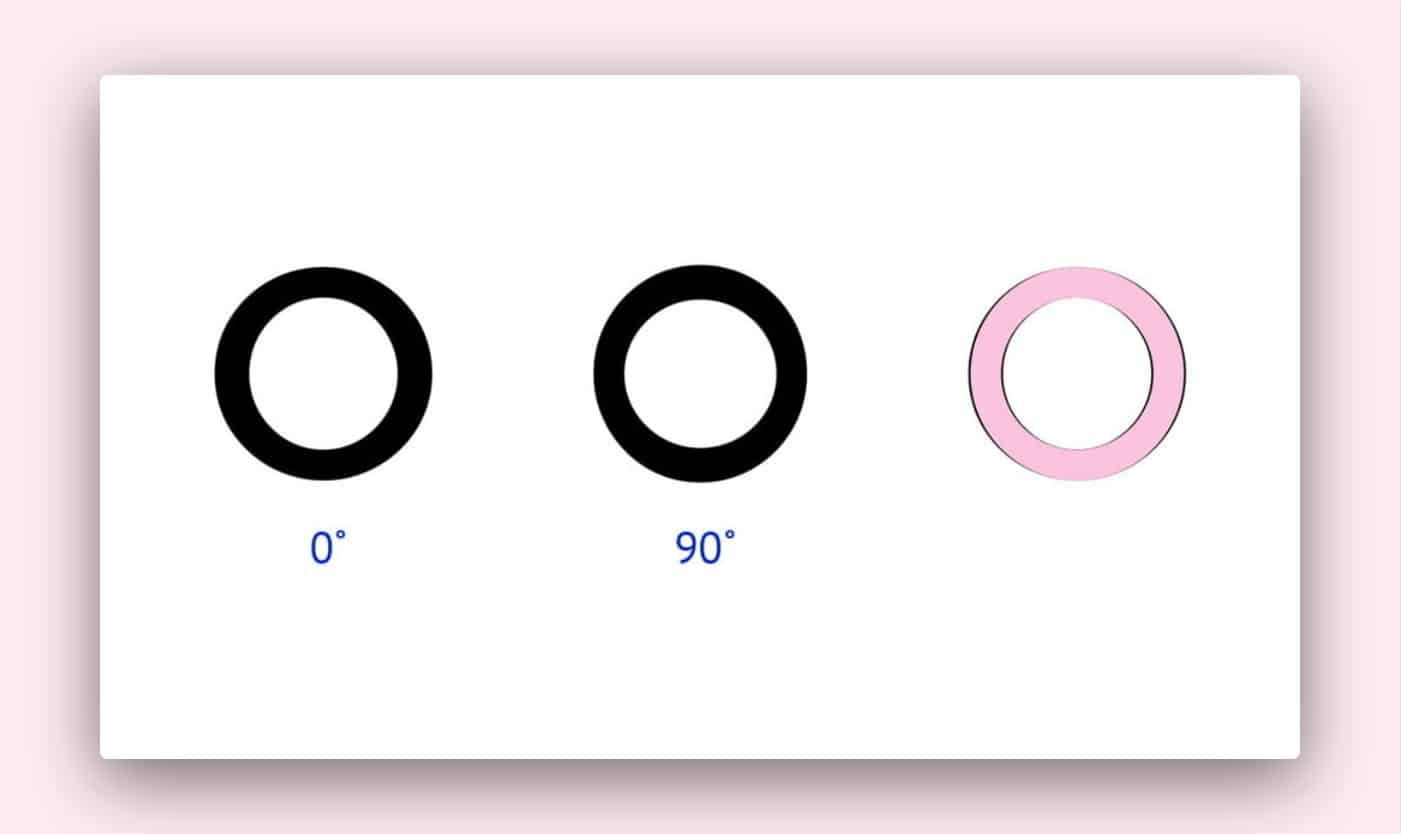 Sometimes it’s appropriate to make letters look alike. For example, in the brand logo: there are few letters, they are easy to recognize. Moreover, it can become the basis of the graphic language.

In voluminous texts, different rules apply. The rhythm is very important in the line of text. It is thanks to the various forms of letters that we easily recognize each of them, we read the text quickly and without tension. Even if the text on the right seems prettier to you, it requires a little more effort to read. The round а look like o, and the brain needs an extra split second to determine which letter it is. And also such a, as on the left, we see more often. She is more familiar and more expected.

But what if the readability of the texts is not very important? For example, for a brand that communicates with an audience through Instagram using visual images. In such image cases, pay attention to the image that causes the font. Maybe everything is finally subjective here? Let’s try to figure it out.

There are a lot of different parameters for describing fonts and classifying them. Let us dwell on a few fundamental ones.

Serifs and their absence

Perhaps the most obvious point that is understandable to absolutely everyone. 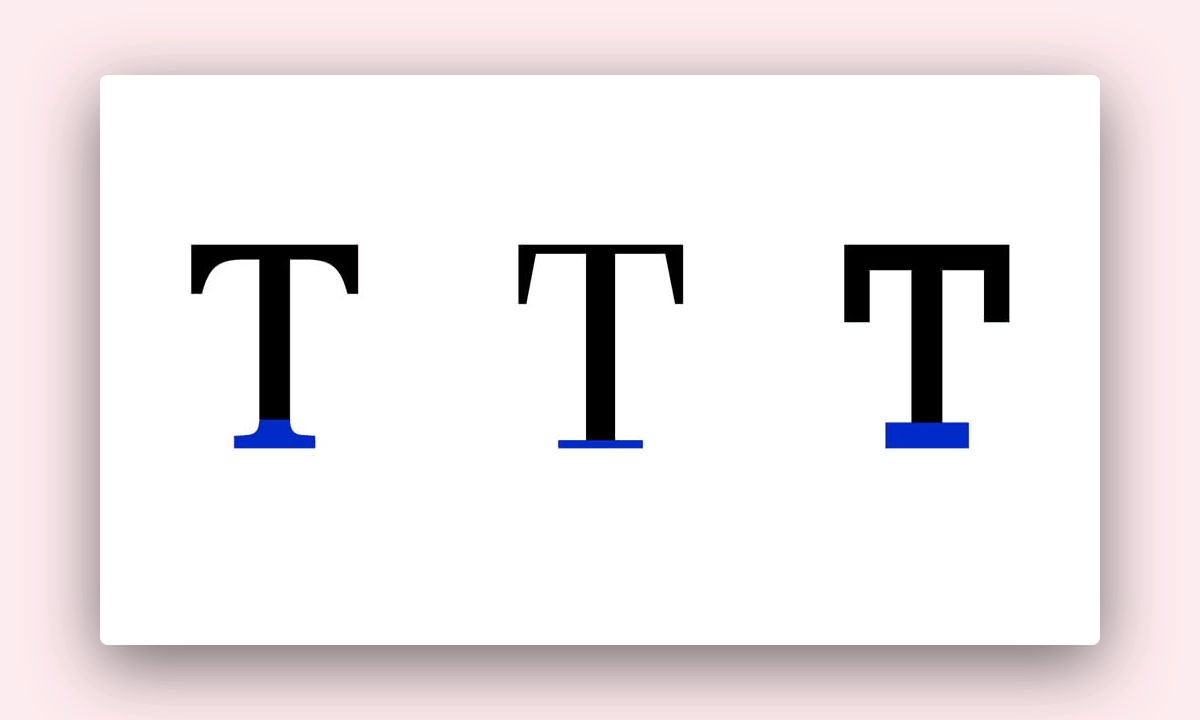 Blue marks are serifs. At the top of the letters are two one-sided serifs. Fonts Lava, NWT Bodoni and Rockwell 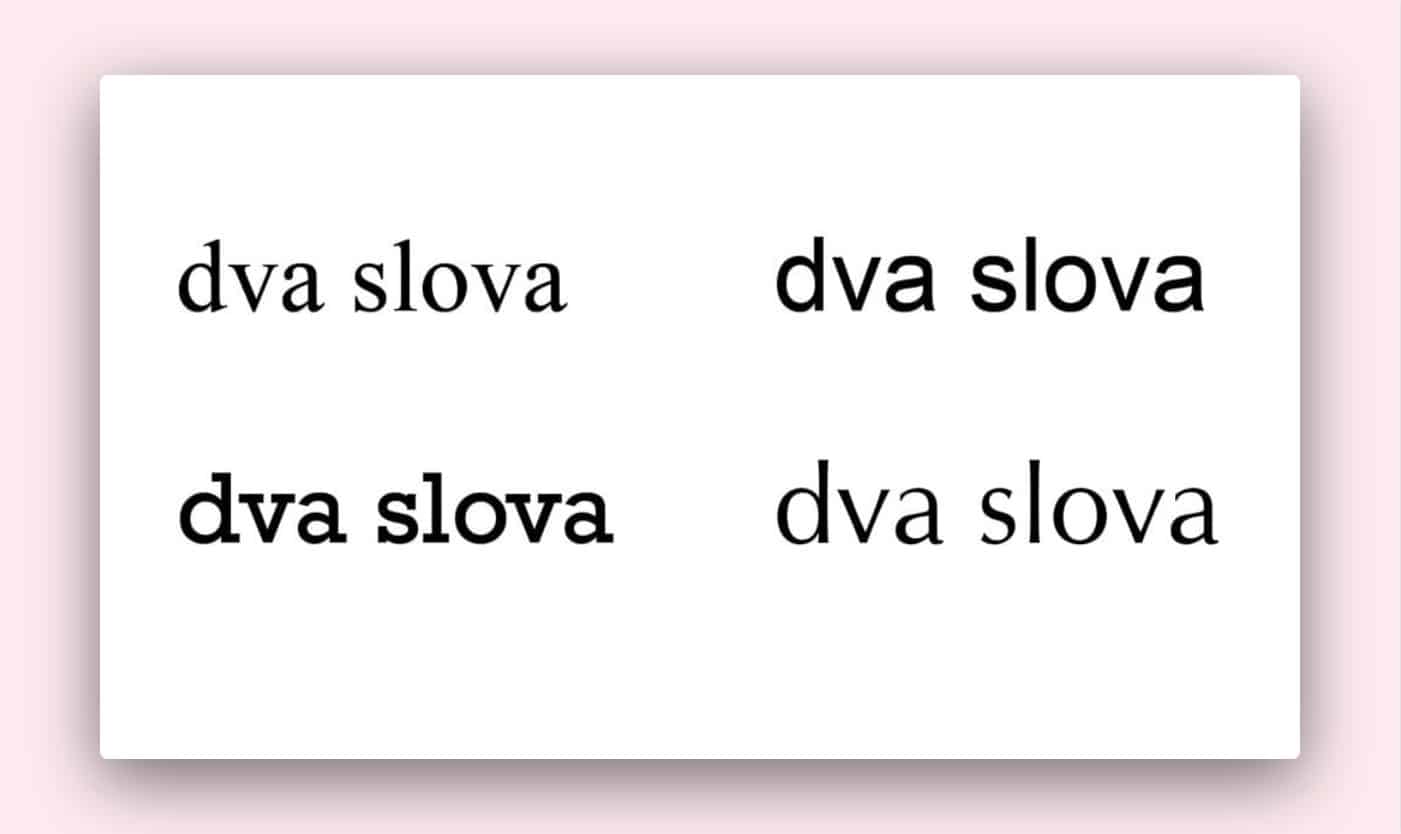 Serifs are a legacy of the past. Now their original purpose is not exactly known, but they appeared in the era of manuscripts. Later, when fonts began to be produced for replication, letters were simply copied from manuscripts.

At the same time, it is incorrect to clearly label the image of an antiqua as traditional and expert, and the grotesque as modern and technological. It’s been possible to remove the serifs from the antiques in the 19th century, and the pattern of antiques has been honed for centuries and have been doing so until now. But we agree that many antiquaries have such a flair.

Choosing a font for the project, it is better to trace the history of its occurrence and find inspiration. 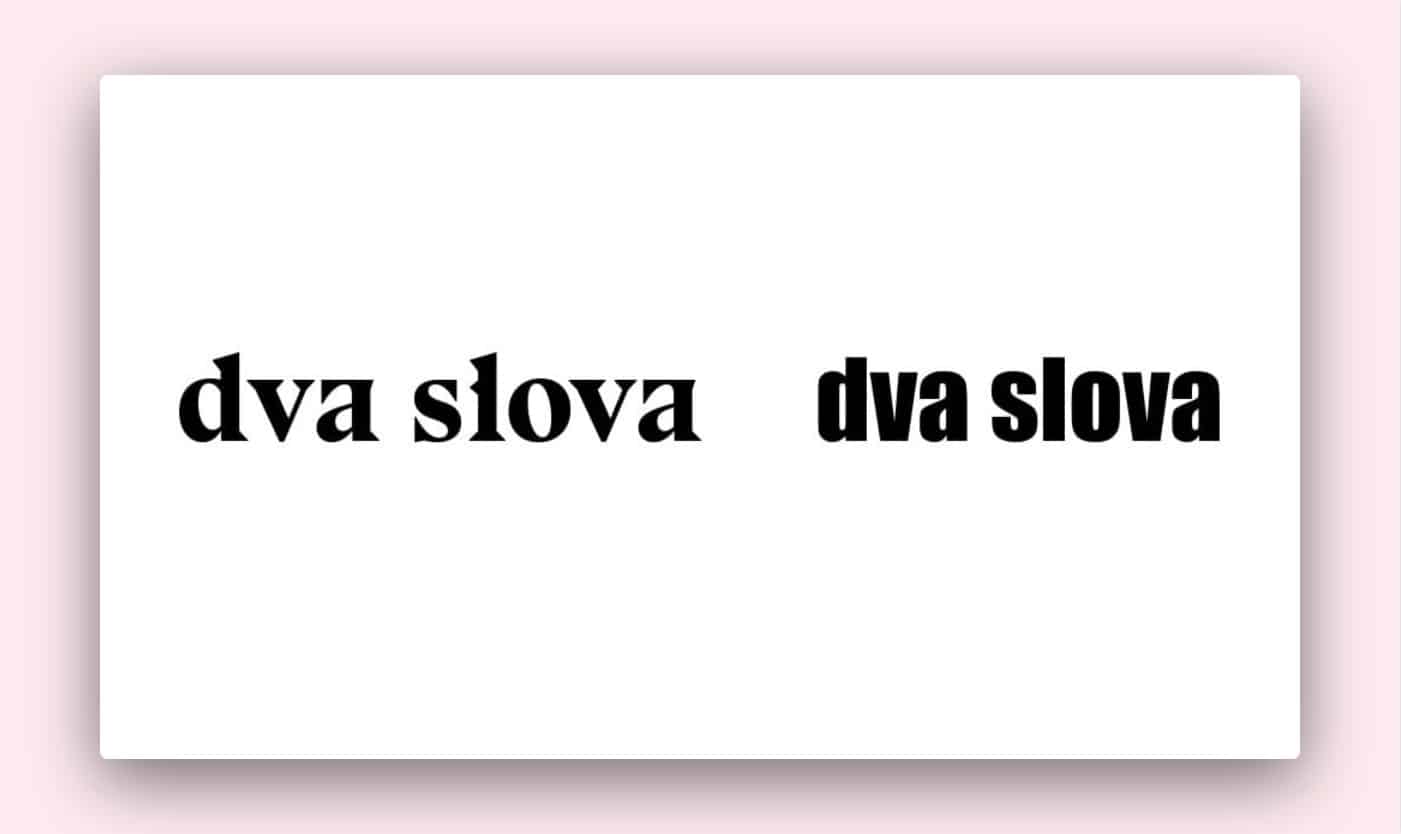 Antiqua may look more progressive than the grotesque, it’s all about the details. Bluu Next and Impact Fonts

Until the recent past, there was a myth that antiqua reads faster and more comfortably in texts of a large volume. This was true when people mostly dealt with text printed on paper. But we have long read much more from the screens of computers and smartphones. And there grotesques reign. People simply rebuilt and got used to sans-serif fonts.

Bar fonts were invented for advertising in the early 19th century. Since then, they have not achieved great popularity and were poorly developed. Therefore, now they give the impression of fonts of past eras, sometimes even of a certain “Americanity” of the times of the Wild West. 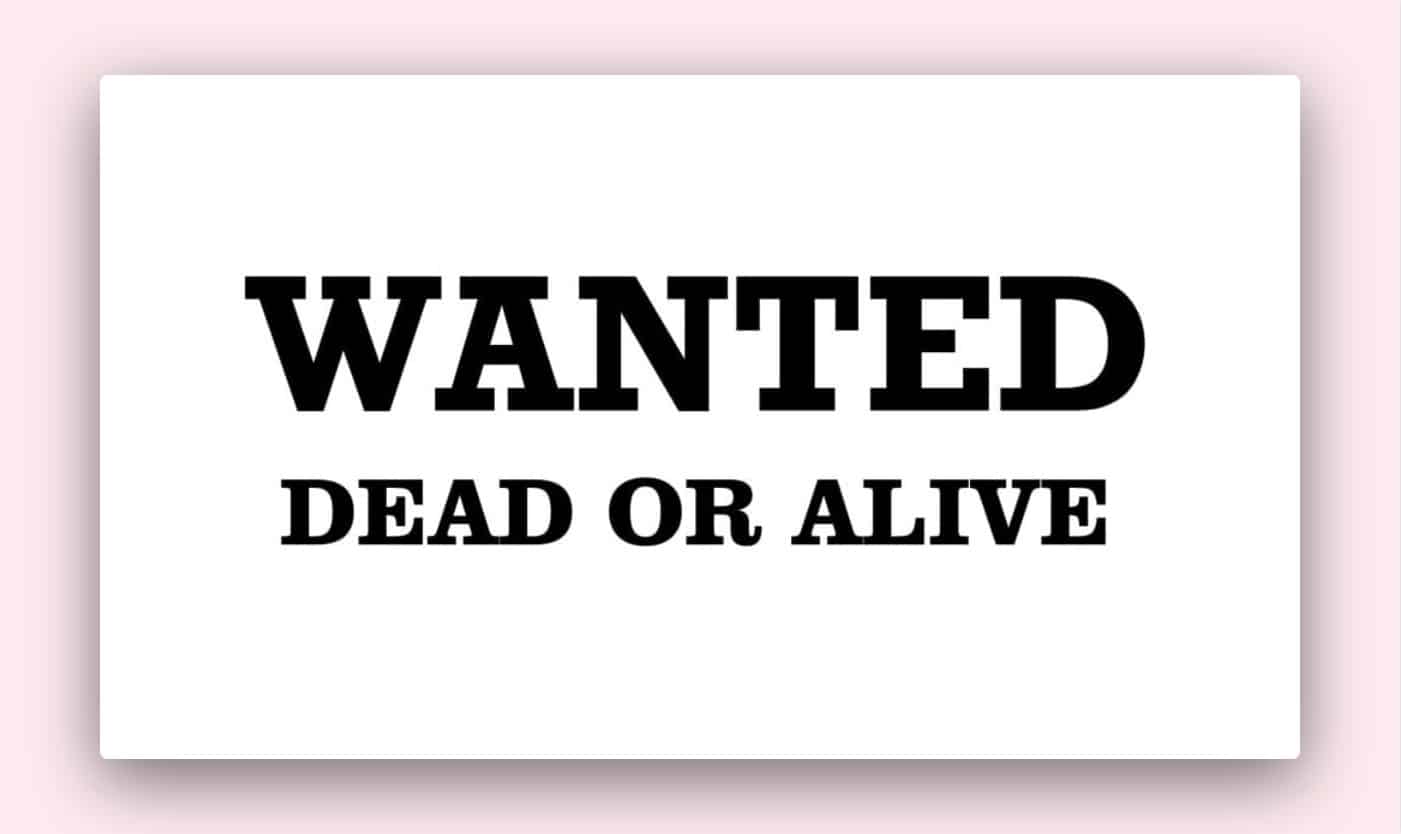 Contrast, tilt of ovals and openness of signs

We mean the difference in the horizontal’s thickness and vertical strokes in the letters. 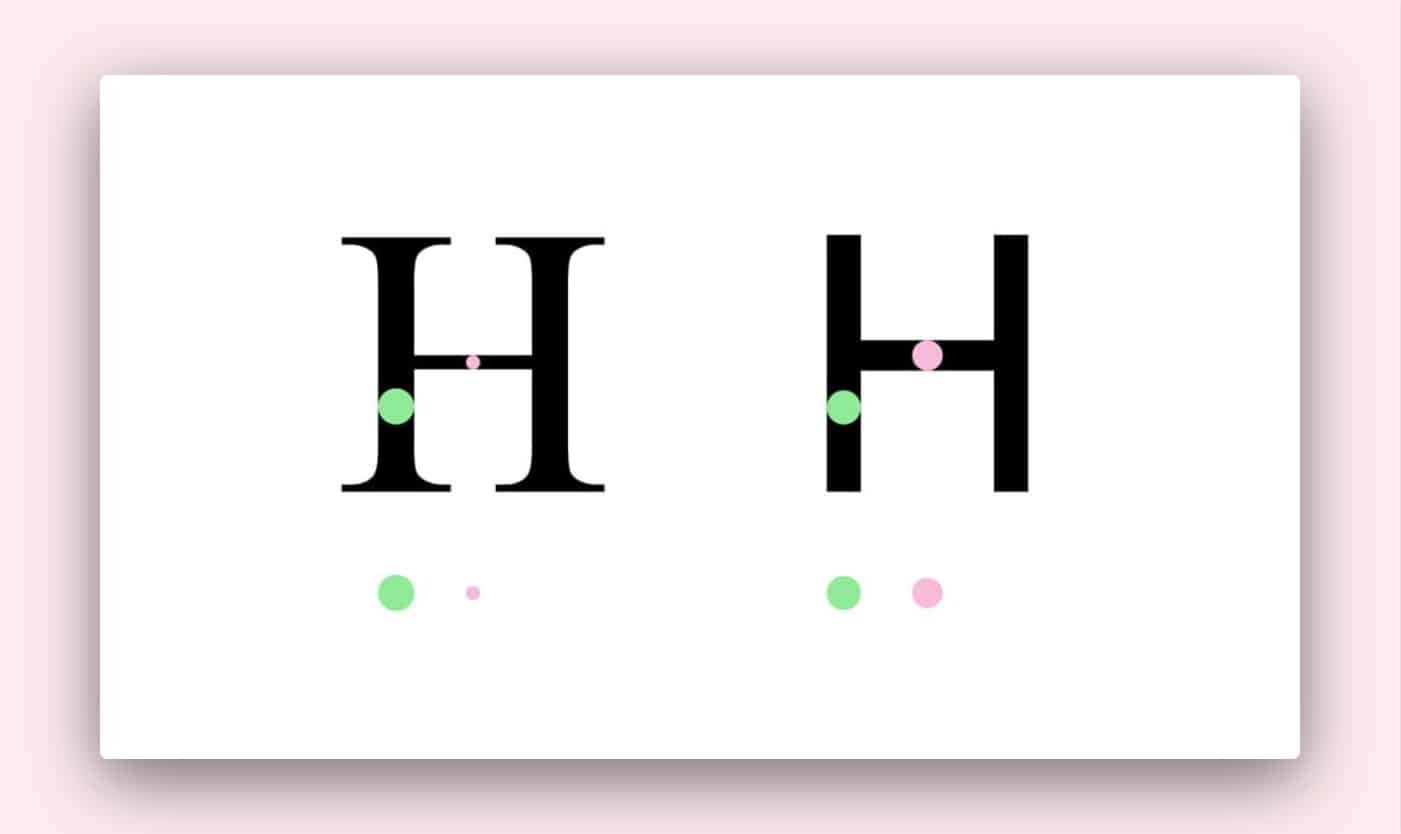 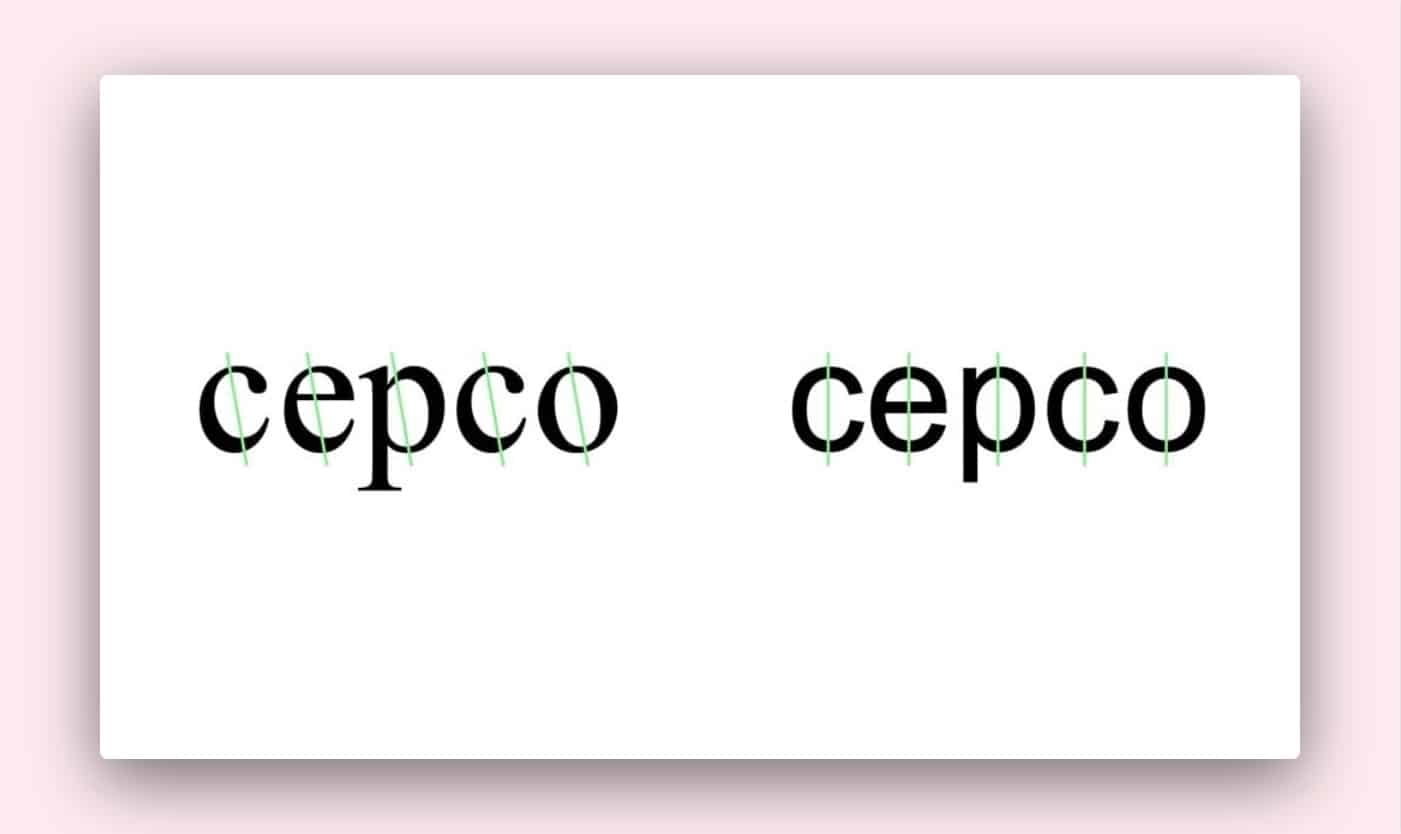 And again Times New Roman and Arial, different axes of their ovals

The openness of the signs is their literal openness in places of oval breaks. It can be perceived emotionally: it is believed that this openness characterizes the friendliness of the font. That is why it has become a ubiquitous feature for many fonts that are issued in our time by user services. 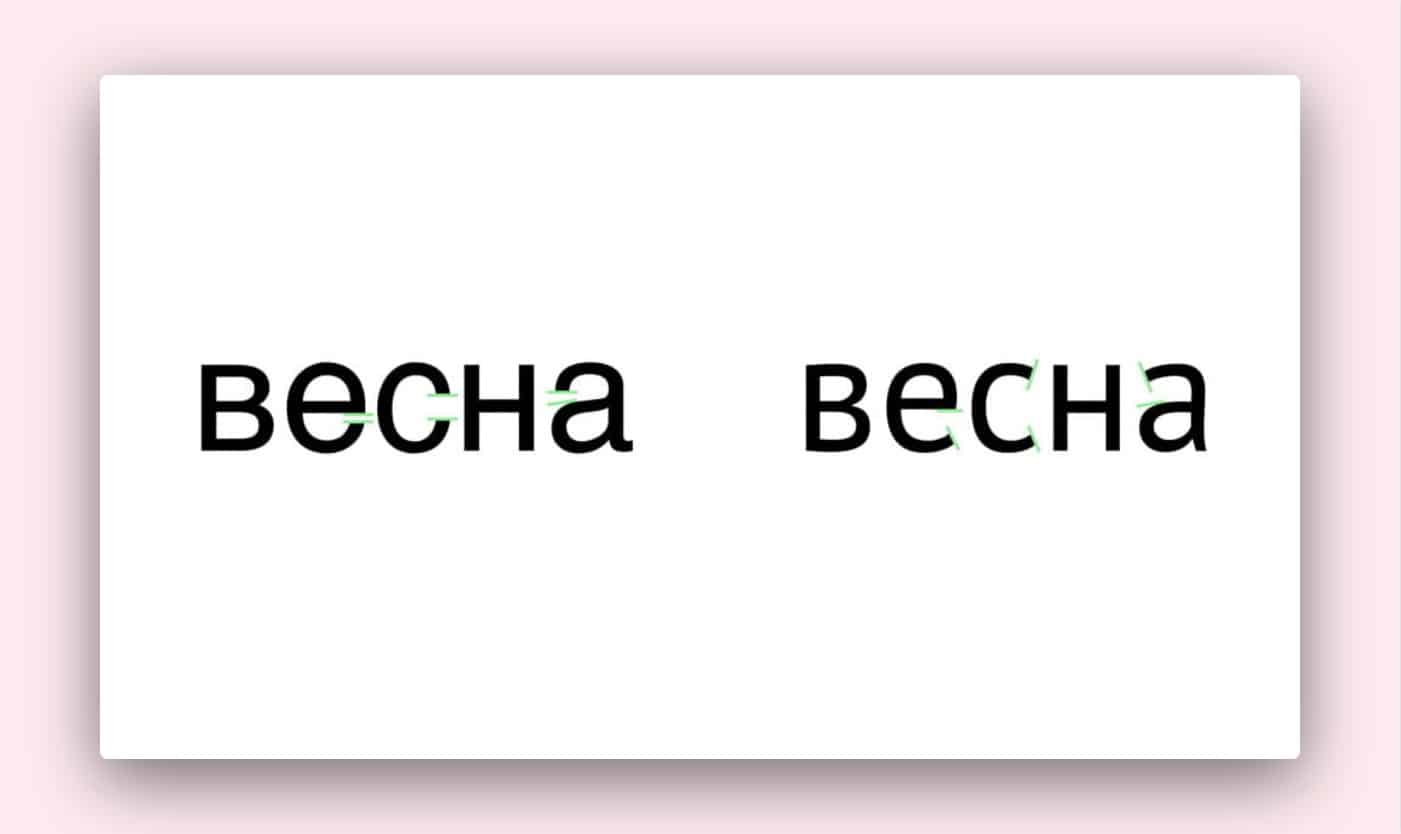 These three properties (and actually more of them) are combined into one group, since they depend on one of the most important aspects, which we will finally pay attention to – the handwritten sources of the font.

In most cases, the basis of text fonts lies in a physical writing instrument. It can be a brush or chisel for carving on marble. However, the most popular are wide-pointed or pointed feathers.

A wide-nib pen is like a flat brush or even a wide-nib marker. The main thing is that the trace that these tools leave is a narrow segment, and the stroke width of the letters drawn by them depends on the direction of the tool. That is why the Russian letter And is not equal to the reflected Latin N. 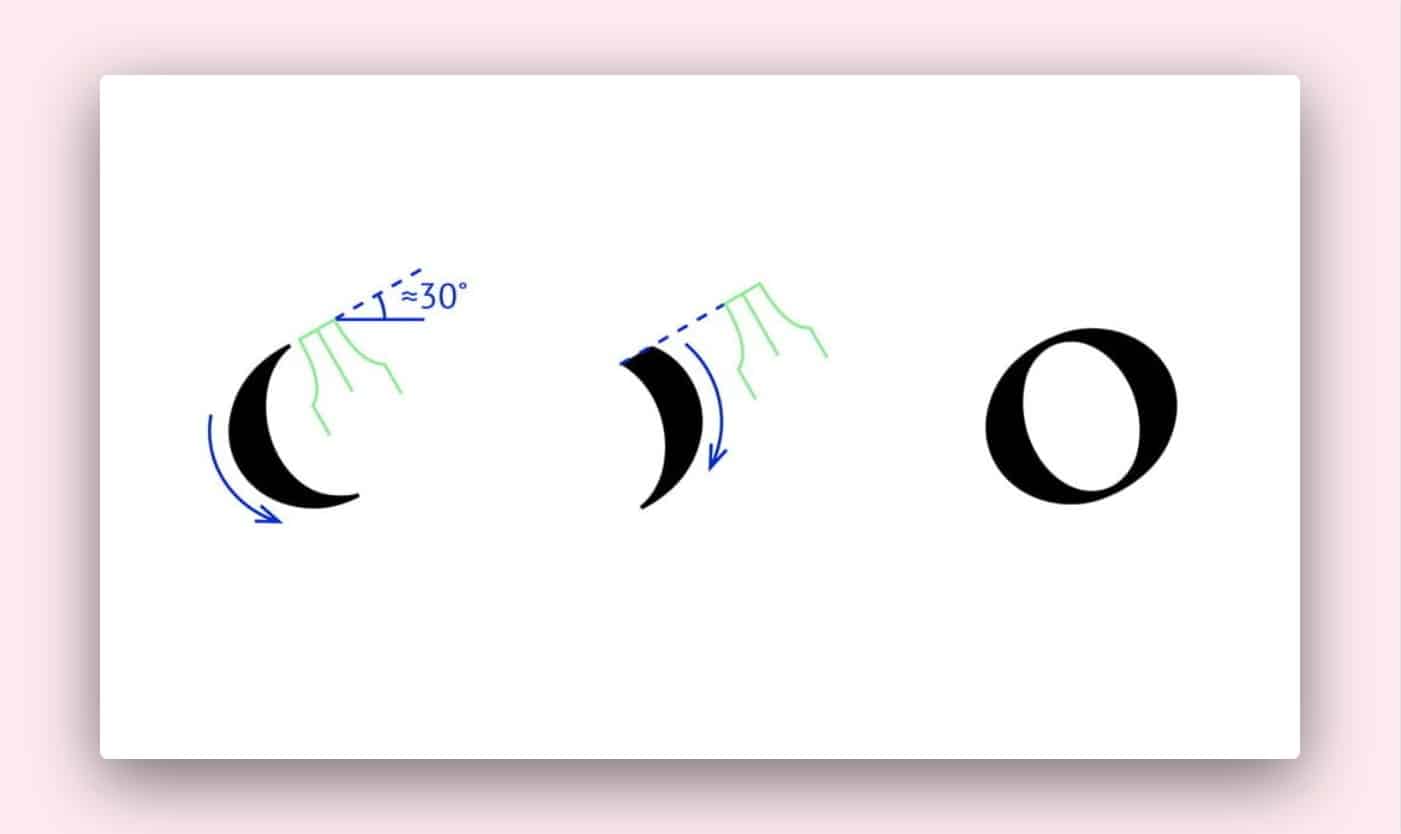 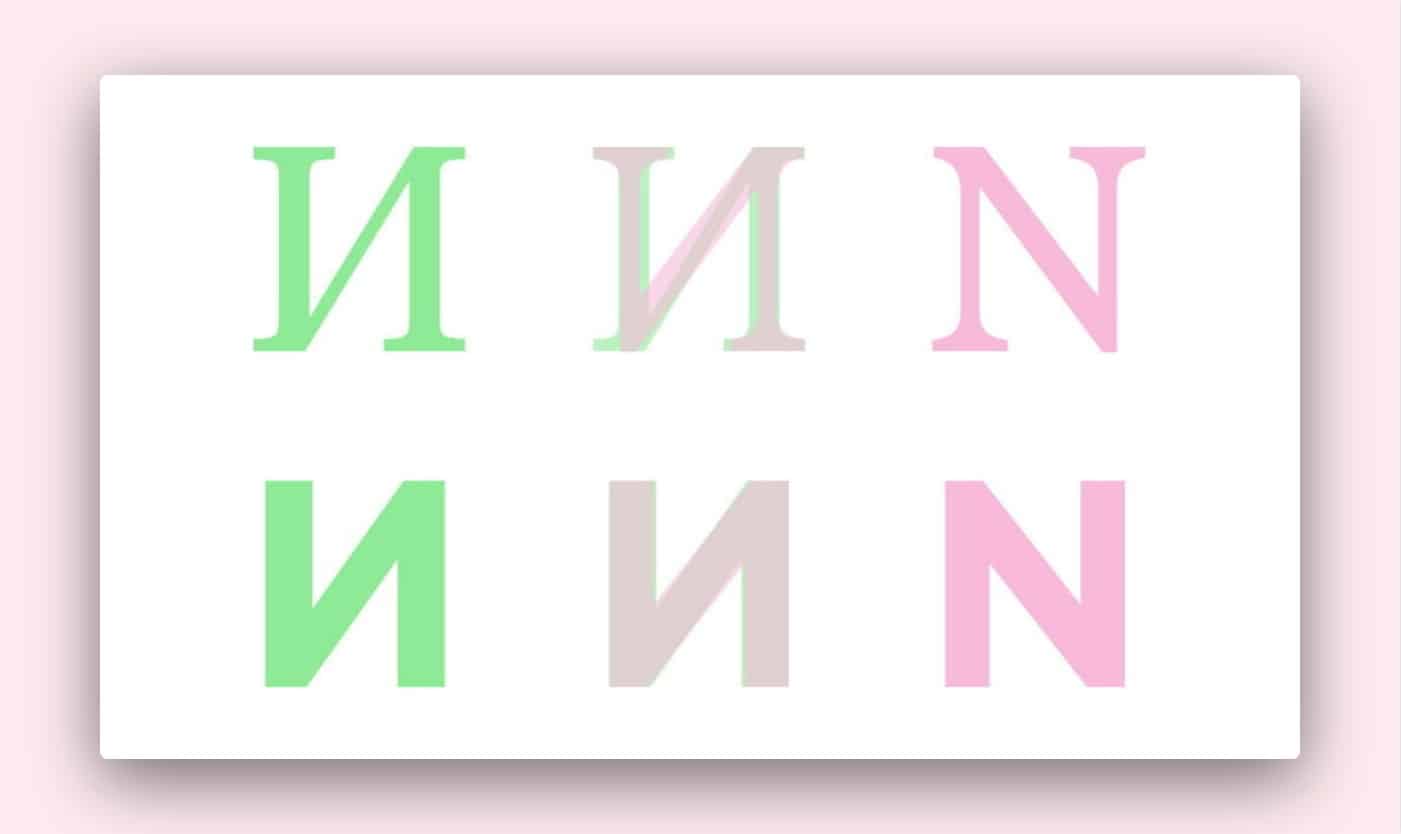 The letters И and N in the fonts Lava and Circe

As a result, fonts that obey the construction logic based on a wide-nosed pen have a small contrast of strokes, a noticeable slope of the ovals and open signs.

All these properties in total make the font dynamic, with a variety of characters. And this, as we have already found out, contributes to comfortable reading. Such fonts are also called humanistic antiqua.

There are also humanistic grotesques that carry the same or similar properties. But if the antiqua’s humanity speaks of its proximity to the origins of font production, then it is more difficult with grotesques.

The first grotesques of the late 19th century had closed forms with horizontal strokes and contrasts in not very obvious places. In the humanistic grotesques that appeared at the beginning of the 20th century, the calligraphic basis is more noticeable. Their signs are more distinguishable among themselves. Therefore, it is believed that such grotesques are best suited for reading voluminous texts. 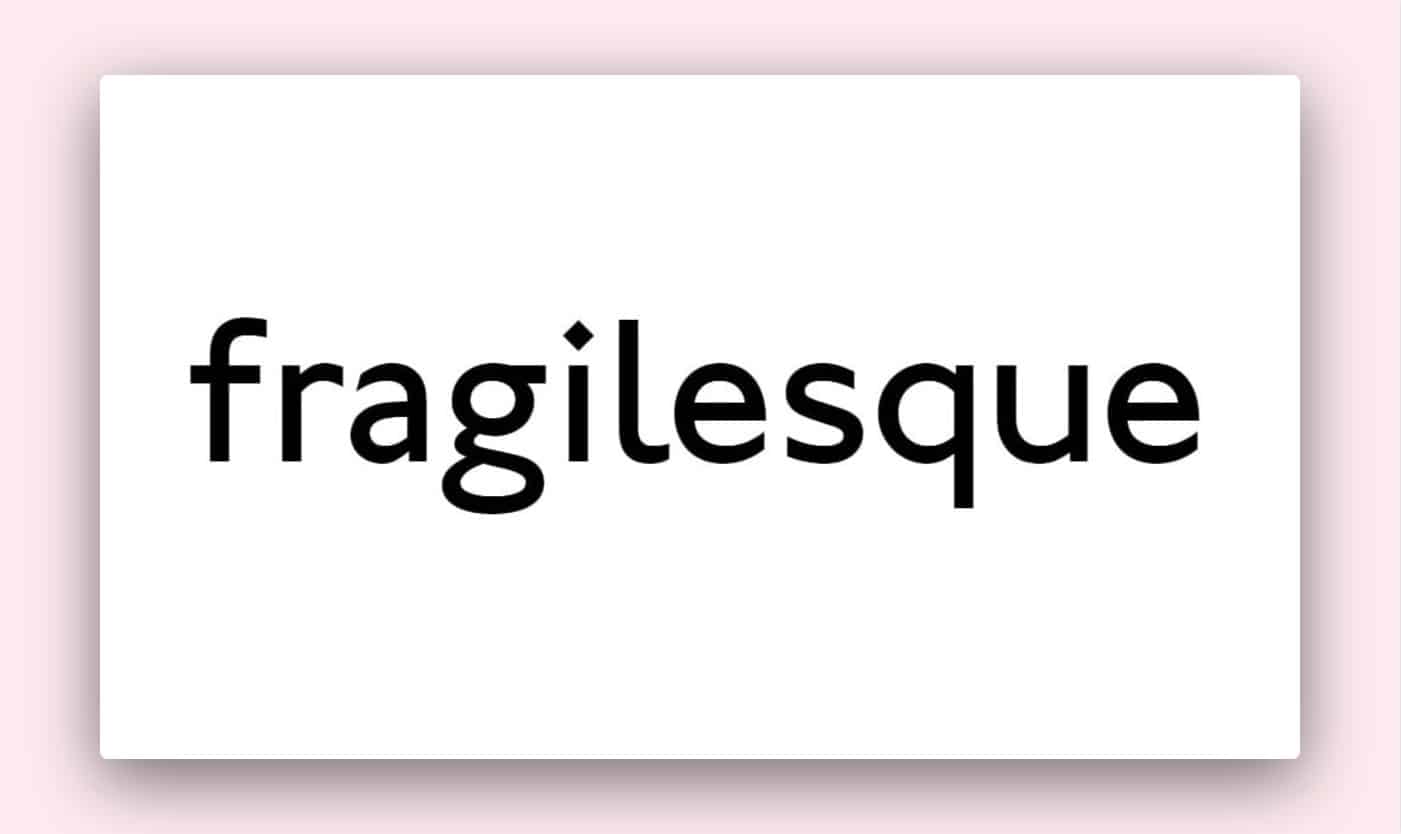 Johnston – one of the first humanistic grotesques (1916). Its author Edward Johnston, some call the father of modern calligraphy. Here is a digital version of the font from ITC

Unlike a wide-pointed pen, the thickness of the lines drawn by a pointed pen depends on the pressure, not the direction of movement. 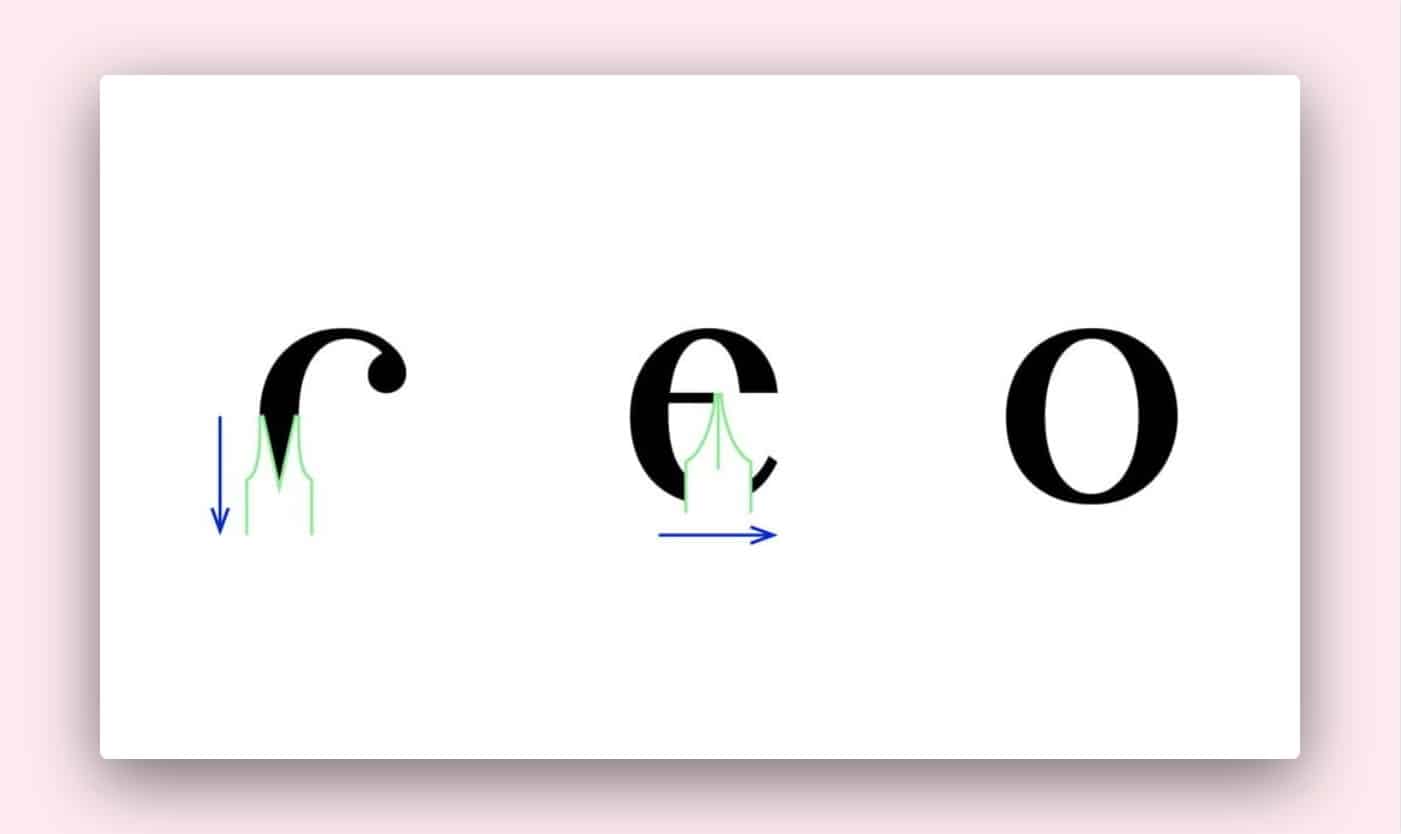 Fonts based on the logic of writing with a pointed pen appeared later, since this type of pen was invented only in the 17th century. In addition, the existing fonts then went farther from their handwritten foundations, becoming more geometric.

These fonts are characterized by a significant contrast in the thickness of horizontal and vertical strokes, the vertical axis of the ovals and a more closed character. They make an impression more rigorous and pretentious. Reading long texts typed in such static fonts is not very convenient. 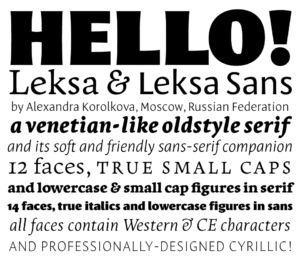 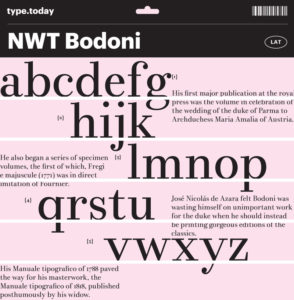 There are classifications in which some grotesques are also referred to as static (they are also called neo-grotesques). They have properties similar to the corresponding antiquaries: closed and equidistant characters, not the greatest comfort for reading.

Like grotesques, they have less contrast of strokes. One of the most famous fonts, Helvetica, belongs to this type. 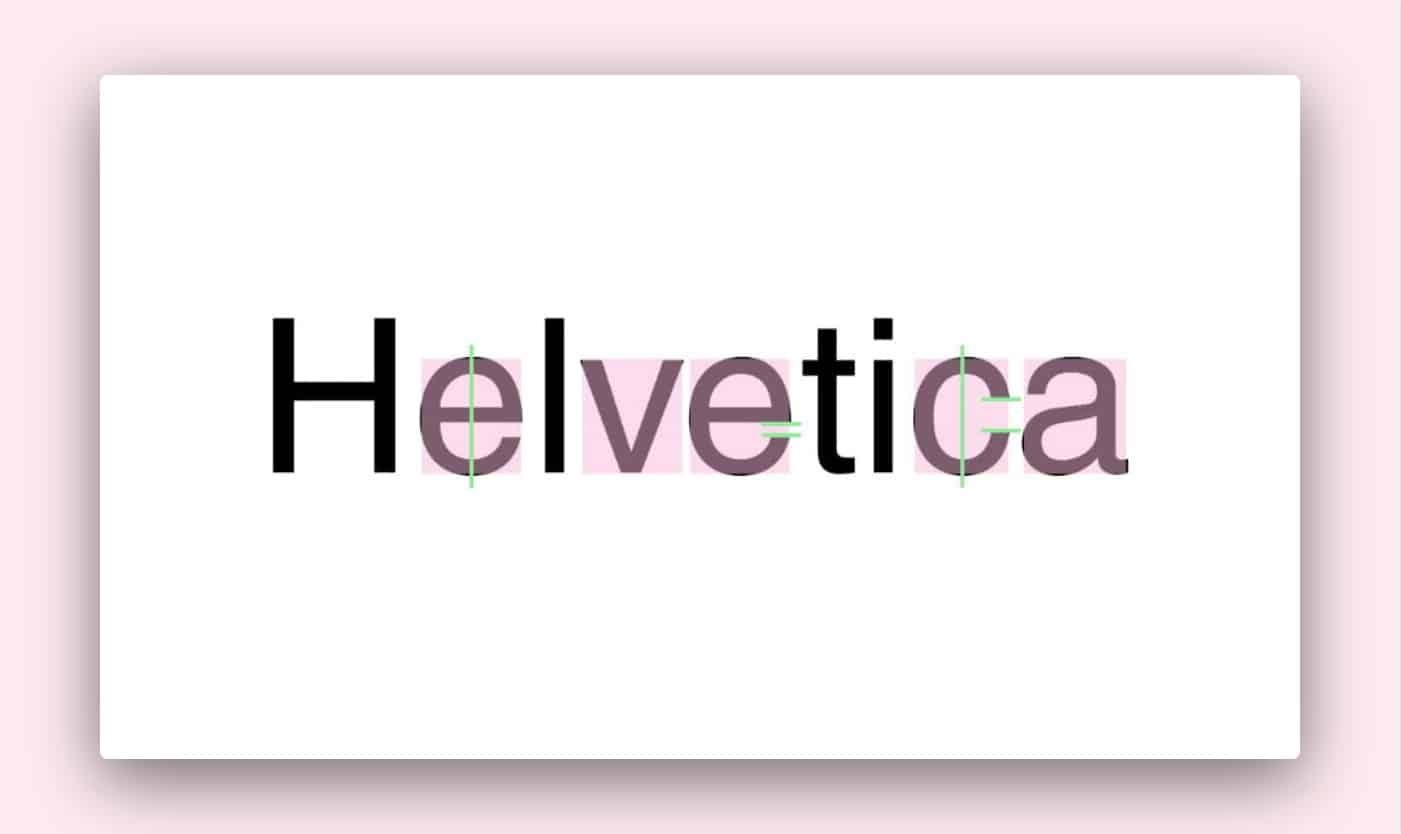 Between the two extremes with the roots in using the two types of feathers, there are many intermediate font options. But if we go into such details, the article will not end soon.

Cyrillic is still more complicated. Not all Cyrillic letters can be represented using the same logic of a wide-nib pen. The pen will have to be turned at least. Why it turned out so unnaturally, a slightly different story, but briefly – Peter the Great came and did everything at once as he wanted, in European style.

Nevertheless, the Cyrillic alphabet also has well-established rules for the depiction of signs. Since they are logical, violating them is unprofitable. It is difficult to explain them more succinctly and succinctly than Alexander Korolkov did. Therefore, just give a link to her legendary article.

The thickness of the strokes of the letters, it is for her that the same Bold button in all text editors is responsible. Besides the regular and bold style in typefaces – especially modern ones – often there are several variations of saturation. This parameter also affects the perception of the font and the typed text.

It would seem that the bold font is more noticeable and somehow more thorough, and the thin font is light and airy. Everything is so, but if you want to make a long paragraph more noticeable, typing it in bold means dooming the responsible readers to suffering and losing everyone else. This will be too lazy for many to read because the letters become similar to the same spots.

Fonts with thin strokes are difficult to read due to the low contrast with the background. They are visually “make a noise” and may even disappear in a small size because of printing or screen resolution of the device. Therefore, extreme saturation options are always best left for headings or other special occasions with short texts. 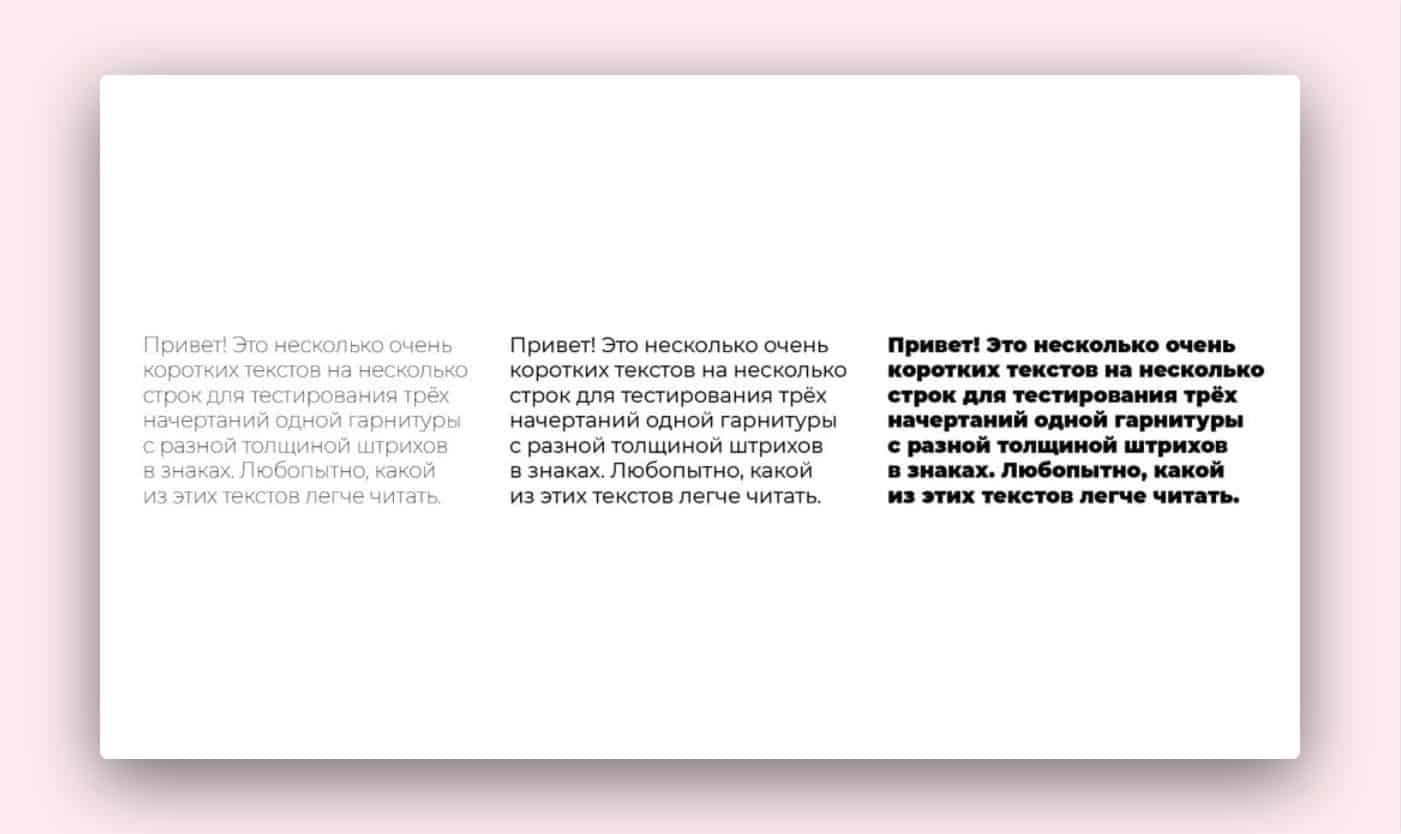 Yes, at first you looked to the right, but it is still easier to read the text in the center. Montserrat Font

Fonts may also have font styles with different character widths. It is difficult to say how this property affects the image that forms the font. But there is definitely something in it.

Perhaps the fact is that in the world of fonts, as elsewhere, there is fashion and trends. Graphic designers do not always think only about design functionality.

For example, some time ago a craze began in extended letters, and before that there was a period when Apple introduced the fashion for fonts with thin strokes. Just because of the recent trend for wide letters, they seem to be subjectively more fashionable and youthful, but everything can change soon.

Today, many important things have remained overboard: several font classes, differences between fonts and lettering and calligraphy, different font file formats, types of font licenses, and much more. And all this often also affects the choice of headset and styles for the project. We will try to talk about this in the following parts.

And remember that in ordinary life it is unnecessary to distinguish Helvetica from Arial at first glance, it is more useful to understand what is common in their character and what it is.

Font "In a nutshell about fonts" can be described in the following words: