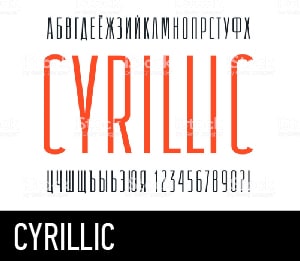 Cyril and Methodius are considered to be the founders of the Cyrillic alphabet. According to the order of the Byzantine Emperor enlighteners made Slavic system of letters, taking as a basis the Greek alphabet.

The inscriptions were sometimes difficult to read, because of the lack of literacy among the majority population, and also due to the abundance of ligaments in the texts. Scribes assigned a special role to the design handwritten books with complex letter bindings. With the development of printing letters acquired similar proportions and shape. This greatly simplified the visual perception when Today Cyrillic fonts can be called universal.

Artists actively use a different typeface in the style of the Cyrillic alphabet for business cards, logos, postcards, and titles for sites in the native Russian style. Simple, clear letters, adding in suggestions, touching their soul, filling the text with a special meaning. In this section we have collected the most readable and artistic Cyrillic fonts.

Here you have the opportunity to download for personal use the best fonts absolutely legal and free. For those who want to use Cyrillic for commercial purposes there are paid, the license options.

Agree that this cost is much cheaper than in the future, the payment of fine for the understandable desire to save money.